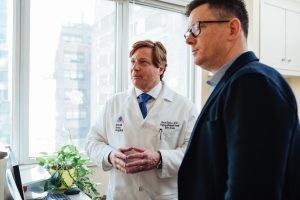 John is a gunnery sergeant in the Marines. Having just spent two years stationed in Okinawa, he’s now back in New York with his wife, Jane, where he’s the Staff Noncommissioned Officer in Charge (SNCOIC) of a recruiting station. They have one young daughter, and they have decided to use this time together (and their new E7 pay rank) to have another child.

That was three months ago, and this new mission of theirs is still ongoing. Three months isn’t a long time, fertility experts will tell you. Fertile couples, on average, have about a 20% chance of getting pregnant each month. Three months of trying means about a 50% chance of conception.

Nonetheless, three months can seem like a long time, especially when you’re not completely sure when you might get a change of station order. Jane made an appointment with her OB/GYN, and she suggested that John see if there was anything he could do to help too.

John was not too sure about that advice. While he recognizes the logic of his wife’s request, calling for an appointment would mean explaining… what? Everything seemed to be working, the at-home pregnancy tests just kept coming back negative. You can’t lead the phone call with, “My reproductive hardware is functioning just fine, thank you, but …”. He tried to explain this to Jane, but she just rolled her eyes and muttered something about “men” and “machismo.” Then she texted him an article about “self-advocacy.”

Self-advocacy, he read, is speaking up for yourself, and learning when to demand the help you need. It means knowing you have the right to make your own decisions about your life, and learning how to get the information you need to support that journey.

Which is all well and good, John thought, except that “self-advocacy” sounded a bit … suspect, and was certainly not a term he planned on using with the other NCO’s.

Nonetheless, letting his wife take all the responsibility in their quest to have a second child was not exactly the manliest of choices either. Having served for ten years now, he knew that what it really needed was acronyms. He did not have the exact toolbox to deal with this new unknown, so he used the tools he was comfortable with.

To better handle SAFI (self-advocacy for fertility issues) he began with some well-established acronyms to help him get a bit more comfortable: Comand, Control and Intelligence, or C2I. C2I, he recited to himself, is “the exercise of authority by a designated commander over assigned and attached forces in the accomplishment of the mission.” The “Intelligence” aspect would be researching fertility and what actually goes into getting pregnant. He knew the basics, but there was apparently more to learn.

And though he knew that there was absolutely no reason to stay silent about his current mission, a little OPSEC (operations security) couldn’t hurt either.

This might seem like a lot of processing to reach a simple conclusion: I need more information, let’s Ask Jeeves. But that is the beauty of self-advocacy. By taking a difficult situation into your own hands – in John’s case by creating a language around the issue he understood – it becomes manageable. He was able to set up action items, starting with a little research. Then, a call to his PCM (primary care manager) on the base to direct them to set up an appointment with… well, whichever medical specialty handles this kind of stuff. This would determine a course of action, or at least, a better set of mission parameters. THIS he could do.

Self-advocacy can be hard, especially when it requires a level of vulnerability one isn’t used to or prepared for. However, C2I (and some OPSEC) to determine if he had NFG (non-functioning gear) or other issues, was something he could handle. Having a baby was an operation that he and Jane could see through to the end.

For those who want to check sperm count from the privacy of their own home, consider a Trak Fertility kit from Amazon.

Dealing with infertility while serving in the military can present challenges that other individuals and couples do not face. For more information on how to deal with Military issues while TTC, including tips for handling TRICARE, click here https://www.nccrm.com/wp-content/uploads/2013/11/Military-Infertility-Handbook1.pdf