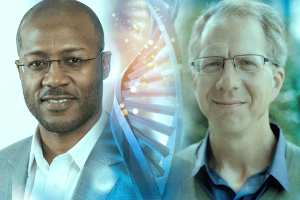 Advances in technology have revolutionized genetic research. We are now able to search across the entire genome for variants associated with diseases, including disorders that can affect fertility, like Polycystic Ovarian Syndrome (PCOS). The team here at MedAnswers geeked out earlier this year following the release of a study of over 110,000 women which identified 14 genetic variants that appear to be associated with PCOS. However, for those who don’t work with a team of highly-skilled, brilliant geneticists breaking down genetic variations and what they mean is…well, let’s just say, not to worry. Because we got you covered.

We sat down with Drs. Bradford Wilson, PhD (BW) and Brian Ring (BR) of our genetics team to discuss the results of this study:

What was so unique about the make-up of those involved in this study?

BW: This study included over 10,000 women with PCOS and 100,000 without. While the sample size is commendable, it’s the method of diagnosis that makes this population unique. The researchers included women diagnosed according to the National Institutes of Health (NIH) criteria, the Rotterdam criteria as well as those who self-diagnosed. PCOS is a complex disease, it might be better described as a constellation of symptoms. By looking at multiple diagnostic methods this study is able to identify DNA variation that contributes to any definition of PCOS

Can you tell us more about PCOS?

BR: Polycystic ovary syndrome is a common disorder among young women. It’s a hormonal disorder that causes a woman’s body to produce a high amount of the hormones that are associated with male reproduction, the androgens like testosterone. This leads to an imbalance in the female reproductive hormones, such as follicle-stimulating hormone, which causes the follicle and egg to develop, and luteinizing hormone, which causes the follicle to release the egg. This in turn leads to a wide variety of symptoms, including irregular and sometimes heavy periods, problems with weight, undesired facial and body hair, and acne. It also can lead to difficulty in getting pregnant. In fact, PCOS is the most common cause of a women not being able to ovulate regularly.

What did the study find?

BW: The researchers performed what’s known as a genome-wide association analysis, where they examined the entire genome of all participants- all the DNA variation that determines how our bodies are constructed, and looked for variants that were common among women with PCOS, but uncommon among women without it. The analysis identified 14 genetic variants that were associated with PCOS in the study population. Of the 14 variants identified in this study, several had been previously identified in studies of other populations. This is significant as findings in this type of study are often not replicated. The products of these 14 genes have a wide range of functions. There are cellular receptors, effector proteins, transcription factors, and specialized enzymes among them.

Was this wide variety of genes a surprise?

BR: Not really. PCOS is what we call a ‘multi-system disorder’, which is a fancy way of saying it affects lots of parts of our bodies. It’s root cause seems to be an underlying hormone imbalance, maybe beginning in the hypothalamus, a region of the brain that helps regulate our hormones. This imbalance can cause problems with weight and blood sugar regulation, which in turn can further contribute to hormone imbalance. This means that we expect to find a lot of genes involved in PCOS. There is not a single “PCOS gene.”

I see, but did any one gene stand out?

BW: One of the more interesting genes they found associated with PCOS is DENND1A. The product encoded by the DENND1A gene is a member of a family of proteins called “connecdenns” that serve a special function in endocrine system signaling. This protein may play a role in gonadotropin-releasing hormone (GnRH) signaling. GnRH is responsible for the release of follicle-stimulating hormone (FSH) and luteinizing hormone (LH). FSH initiates the growth of ovarian follicles and LH initiates ovulation. This gene was also associated with PCOS in a smaller PCOS study in 62 European families. The connection to GnRH makes the association of the DENND1 gene to PCOS intriguing.

Does this study move us closer to curing PCOS? Does it give us a better diagnosis?

BW: It definitely helps us to understand PCOS better. However, it’s important to note that although the results of this study are promising, additional research is still needed. In order to identify all of the variants associated with PCOS, larger studies with more cases and a more diverse population are needed. The population of this study was mostly of people of European descent. Diversity is critical because the genetic drivers of PCOS may be different from one family and one population to the next. In order for genetic research to benefit all people, all populations must be represented.

It will likely take time for these additional studies on larger populations to be performed. But we will do our best to keep you up to date as they arise.

If you enjoyed this Q&A and would like to see more of them, please let us know in the comments below.