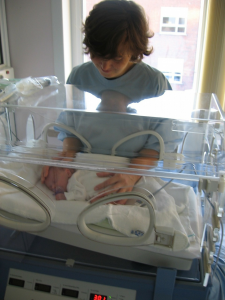 My twins are grown now, but when they were little, we often went to Coney Island on the 4th of July to see the fireworks. They’d ride the Cyclone and then we’d hit Nathan’s, to watch the who-can-eat-the-most hotdogs competition. After that we’d hang out on the board walk until the display started, a little after sundown. I love Coney Island. I’ve been going there since I was a little kid myself. My dad used to take me to the chick hatchery and put me smack in the middle of the fluffy little yellow things until I had my fill of patting their soft, downy coats. I used to love that, and cried bitter tears when it closed.

There was a place my dad didn’t take me, a place I didn’t even know existed. Ironically, had my own kids been born in 1945 instead of 1995, I would have known about this place all too well. It was the most popular attraction of its time, located in the Coney Island Freak Show. Incubators. For human infants, born too soon. Like mine.

After a two-year struggle with infertility, my twins were born on the first day of my third trimester. I never made it to a Lamaze class, and didn’t have time to paint the nursery. My babies weighed a little over two-pounds each. They lived in state-of-the-art incubators for over two months, in a hospital with round-the-clock care. They were lucky. For babies born from 1903-1945 there was only one place they had a shot at life and that was in a freak show, not in a hospital. At that time doctors from around the country rushed premature infants to Coney Island for treatment. There was no other option available for these most fragile souls.

File this under, Where There’s a Will, There’s a Way. Often ridiculed and sometimes revered, Dr. Martin Couney was determined to save premature babies, when the world assumed they did not have a chance, when infant mortality rates were so high that these tiniest of the tiny were not even an afterthought, except for the parents who buried them, or abandoned them at birth. Dr. Couney continued to experiment and refine the incubator system in the only place he could, among the barkers and cotton candy sellers. Out of 8,000 babies, 6,500 lived, because of The Incubator Baby Exhibit in Luna Park. The development and application of an important, ground breaking technology was paid for with each sticky handed admission, twenty five cents at a time. There was simply no other way for him to fund his work.

Eventually hospitals caught up to Coney Island, with Cornell being the first, and of course the rest of the world followed. Had it not, I wouldn’t be a mom to two amazing people today.

So this year when I’m oohing and aahing at the fireworks I’ll be hearing the barkers yelling “Looka Looka! See the Babies no Bigger than Chicks!” and remembering a time when my own babies looked like a two-pack of Cornish hens. I’ll say a silent thank you to Dr. Couney, and remember to never give up, no matter what the odds.